Share a memory
Obituary & Services
Tribute Wall
Read more about the life story of Anthony "Peanut" and share your memory.

Anthony Dwayne ‘Peanut’ Roberts, 41, died suddenly and peacefully from a stroke while surrounded by his family and comforted by his mother, Irene Roberts, and his son, JeCori Roberts, at The Toledo Hospital on January 16th, 2023.

Peanut was born to his late father, Wilson Bura Roberts and Irene Roberts (née Marshall) in Sandusky, Ohio on September 2nd, 1981.  As a youngster, he developed his trademark wit and humor, smart attitude, love of well-groomed appearances, slick haircuts, Player’s Ball-esque wardrobes, and a slight case of OCD. Growing up, Peanut developed a penchant for sports and considered himself a three-sport star on many basketball courts and city fields throughout Sandusky. He was a football running back (until he broke his ankle), track and field sprinter and hurdler, and a small forward/power forward/jack of all trades in basketball. As a teen, basketball became the sport that defined his identity and friendships, along with his patented durag, ‘waves’ hairstyle, and female admirers while attending Sandusky High School (SHS).

A graduate of SHS in 1999, he went on to attend Columbus State Community College for two years. While in Columbus, Peanut had the opportunity to rub elbows with numerous The Ohio State University athletes, befriending 2002 National Champion Chris Gamble and Superbowl winning receiver for the Pittsburg Steelers, Santonio Holmes. Following his time in Columbus, Peanut would move back to Sandusky and work numerous jobs throughout the city, famously doing whatever he wanted while working at Breakers Express Hotel with his younger brother. Always the sweet-talking charmer, Peanut got out of numerous fire able offenses while on the job, remaining the life of the party in the out of the breakroom. One of the most important roles Peanut had while back in Sandusky was supporting his ailing mother and father, who also had diabetes. Peanut continued to be the primary support for his mother following the death of his father in 2015. Most importantly, his move back to Sandusky brought with it the opportunity for him to become a father, with the birth of his son, JeCori Roberts, in 2010.

Peanut had much to be proud of, whether it was his “famous” macaroni and cheese, his often exaggerated good looks and hair (which he would later lose due to a lack of humility), his sister’s sons who became great basketball players in spite of having him as their first coach, or the fact that he was seemingly known by everyone in Erie and Huron Counties due to his ability to strike up a conversation (or argument) with anyone he came across. He was the family’s best joke teller (debatable), wise cracker, car washer, fisherman (debatable), fashionista, and father (we’ll give him that one). He loved to fish and golf, though he was prone to adding mulligans and disputing his drops, often placing his ball within his limited putting range on the green. He instilled a love of good music in his younger brother and nephews, was always at the defense of his sisters, and was a momma’s (and daddy’s) boy through the end. He was a devoted, caring, strict but empathetic, father who had a knack for turning everything into a life lesson, followed by a joke. He had the most unique laugh in the world, which could be heard often as he was always the first to laugh at his own jokes and the last to laugh at yours. He has left a long-lasting impact (for better or worse) on those who had the honor of knowing him.

Anthony is proceeded in death by his father, Wilson Bura Roberts and survived by his mother, Irene Roberts, his son, JeCori Roberts, his sisters Latishia Brown (née Harris) and her husband, Kansas Marshall, Aeisha McKinney (née Harris) and her husband, Tianni Marshall and brothers Christopher Roberts and his wife, Darryle Hughes, Wilson Cardwell and his wife. He was dearly loved by his 26 nieces and nephews, along with his 9 great nieces and nephews. Peanut will be missed by countless aunts, uncles, and cousins from all over the country who had the opportunity to be on the butt of his jokes that were always shared with love. Most of all, he loved his son more than anything in the world.

Friends will be received on Saturday, January 21, 2023 from 10 a.m. until a funeral service officiated by his cousin, Pastor Luke Walters begins at Noon at Victory Temple, 1619 W Strub Rd, Sandusky, OH 44870.  Burial will follow at Oakland Cemetery.  Foos & Foos Funeral Service, Bellevue is in care of arrangements.

Memories and condolences may be shared at www.foosfuneral.com 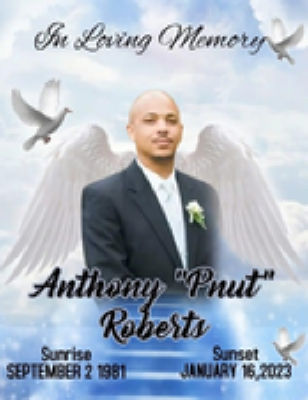